The Labour Land Campaign responds to relevant Government and Labour Party consultations, and submits resolutions to Labour Party and Trade Union conferences.
Please ensure that your conference delegate supports our resolutions when they are debated.

Tax Unearned Income from Land and other Natural Resources

Labour leadership candidate Andy Burnham has called for higher taxes to help pay off Britain’s record deficit. The shadow health secretary said that putting up taxes could be the only alternative to devastating cuts to public services. Launching his leadership manifesto, he said that he would split the burden of tackling the deficit between 60% spending cuts and 40% tax increases, rather than the 80%-20% split the coalition Government was planning.

“The trouble with the spending cuts on the scale that the coalition are proposing is that they would wreck lives altogether,” he told BBC Radio 4’s The World at One. “My worry is, yes, they may bring down the deficit but in doing so they may change for ever the character of public services in this country and unpick the social fabric.” One option in the manifesto was for a land value tax based on the estimated value of the land an individual owns – for most people the value of their homes, less the buildings and fittings.

Mr Burnham said that introducing the measure could enable other unpopular taxes to be scrapped. “If we move towards a land value tax we could end some of the most unpopular taxes such as stamp duty and inheritance tax,” he said. “These issues are very important, particularly stamp duty because it stands in the way of young people putting down their roots and getting on in life.” Another option could be a “solidarity wealth tax” where the total value of an individual’s assets, less any debts, would be subject to an annual tax.

See further comments from Andy Burnham on LVT in an article he wrote for The Guardian website, ‘Land value tax – not old or New but true Labour’.

From the Lib Dem manifesto:

Reform business rates, creating a fairer system where rates are based on site values rather than rental values and are the responsibility of local authorities…

In the long run we favour moving to a system of Land Value Tax, where the level of taxation depends on the rental value of the land concerned…

From the Co-operative Party manifesto: 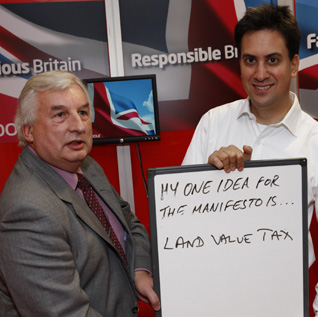 The following motion has been put forward by the Croydon & South London Branch of the Communication Workers Union, for consideration at the CWU conference to be held on 23-24th May at Bournemouth.

That a Land Value Tax would be a much better revenue stream for public benefit, far superior than previous attempts by Labour Governments to tackle land taxation such as the 1947 Development Charge, the 1967 Betterment Levy, and the 1976 Development Land Tax. The taxes thus raised turned out to be severely complicated and costly to implement and generated considerably less revenue than had been expected.

A Land Value Tax has much greater revenue-earning potential that would provide the government and local authorities with funds to allow investments in infrastructure and public services for the benefit of all. This in turn would provide the opportunity to reduce or withdraw other taxes that currently have an adverse impact on the economy and on welfare, including the potential to replace Council Tax as a first step towards introducing Land Value Tax on a wider scale and on a national basis.

Conference therefore instructs the NEC to promote this alternative Land Value Tax as a vehicle to tackle the housing crisis and provide much better revenue for general public development.

Additionally, the NEC to consider submitting this motion to the next TUC and Labour Party Conferences.

Following the adoption of LVT in the Co-op Party manifesto, LLC members are lobbying Labour to follow the example set by its sister party. Carol Wilcox and Rob Evans [photo] took the opportunity to raise the issue with Ed Miliband at this year’s Labour Party Conference in Brighton.

Land Reform – As we seek to bring stability to the financial system, it is only right that we aim to do the same for the property markets. A key policy concern for the future has to be to keep growth in house prices consistent with other parts of the economy. We should use taxation to change incentives within the property market, ensuring that we incentivise the productive use of land rather than expected capital gains in an upward market.

It is not only the failure of the banks that has brought us into these difficult times. In the twelve years preceding the credit crunch, the unprecedented growth that occurred in the UK housing market has had a dramatic effect in the downturn.

A significant cause of this has been the rising cost of residential land. As economic growth has occurred, this has led to inflationary pressures on the prices of residential land in scarce supply, or restricted in the places where everyone wants or needs to be. There is nothing new in all of this. The last 200 years have seen regular 15-20 cycles of economic growth and recession that have brought rapid uplift in land values, and ended in their implosion.

As we seek to bring stability to the financial system, it is only right that we aim to do the same for the property markets. Instability here has been a key determinant of every recession that we have faced over the last 30 years. Given this, a key policy concern for the future must be to keep growth in house prices consistent with other parts of the economy. Expanding the supply of homes in the UK will be crucial.

The Government should ensure it meets the target of an additional 3 million homes before 2020, as this will be crucial to making sure we do not begin the same cycle in the upturn. Community Land Trusts and Mutual Home Ownership can play a vital role in building the homes that are needed to meet demand (see Creating Sustainable Communities for more detail).

Yet tackling the problem of inflated land values is also important. There is significant evidence to suggest that the shortage of homes in the UK has been artificially created by a poorly functioning property market. This has had the effect of substantial growth in house prices, with the market rewarding those with property assets at the expense of people seeking places to live. In order to prevent similar problems emerging in the upturn, the Government should use taxation to change incentives within the property market, ensuring that it incentivises the productive use of land rather than expected capital gains in an upward market.

The Government should replace council tax and national non-domestic rates with a land value tax. While this would be a new method of taxation in the UK, countries such as Denmark, Hong Kong and Taiwan utilise land values to help their economies. Local Authorities in parts of Australia, South Africa, New Zealand and North America have all adopted local forms of land value taxation. This is likely to not only improve economic stability but also stimulate investment in more productive elements of the UK economy over the medium to long term.

The Co-operative Party, affiliated to the Labour Party, is the second largest UK centre left party and has representation in both Houses of Parliament (29 Co-op-Labour MPs & 12 members of the House of Lords), the Scottish Parliament and the Welsh and London Assemblies, as well as over 350 elected local councillors.

The following motion was passed at the Co-operative Party Annual Conference held over 11th-13th September 2008:

This conference notes the ongoing debate about local government finance based on the Tories’ Council Tax. Conference believes that in determining the debate local authorities should be allowed to evaluate the benefits or otherwise of the implementation of land value tax locally.

Motion to AGM of PCS Union

Public and Commercial Services Union. It will be debated at the Union’s AGM in May. Please support the motion if you are a member. Or alternatively, use the text within your own Union’s structures to further the cause of land value taxation.

The Professional Land Reform Group has
responded to the consultation on the proposal from HM Treasury, HM Revenue & Customs and the ODPM for the introduction of a Planning Gain Supplement.

The Labour Land Campaign suggested the following resolution for the Labour Party annual conference this year, but it can also be used in Trade Unions and other organisations for a specific conference or just as a general resolution.

The Labour Land Campaign would be happy to speak to any organisation considering putting the resolution to its members. Email us for a chat or to request a speaker.